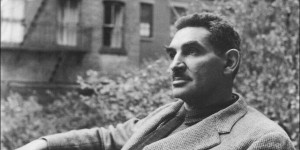 Known for his support of “action painters”—his term for the Abstract Expressionists—Harold Rosenberg (1906-1978) was, along with Clement Greenberg, at the center of mid-century American art criticism. Together, these two critics developed the vocabulary and analytic tools to understand Abstract Expressionism, and to explain its advancements to the rest of the world. There was, however, a catch: they had differing views on why, exactly, this new art was important—and it was in large part their rivalry gave a sense of immediacy to their essays on the new American art. It also pushed them to be exceptionally prolific. Dogged antagonists, they published their essays in combat with one another, and released their anthologies in a syncopation of one-upmanship.

What follows is a rundown of Rosenberg’s theories, as well as how they clash with Greenberg’s.