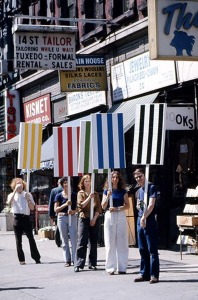 At 77 years old, Daniel Buren has lost none of his disruptive streak and continues to talk frankly.  Throughout his career, Buren has challenged the viewer’s concept of space with his in-situ works. In 1971, in the Guggenheim Museum, he controversially installed a 66 x 32 ft. canvas banner with his signature vertical stripes, which dissected the exhibition space under the rotunda in two, obstructing at times the view of other artists’ works in the group show. Their negative reaction was so strong, that the work was taken down before the opening. His first permanent public commission, “The Two Plateaux,” 260 black and white columns of different heights was installed in 1986 in the courtyard of the Palais Royal in Paris and immediately generated an art-or-eyesore controversy.

Asked to describe his work to a neophyte, Buren quips he couldn’t possibly: “I’m working with space, but that doesn’t tell you much.” Seated in one of Cabanons’ tents, bathed in yellow light, Buren talked to ARTINFO about his career, ‘that’ Guggenheim failed exhibition, why he “hated” the current Venice Biennale and why he agreed to collaborate with Hermes and Louis Vuitton.