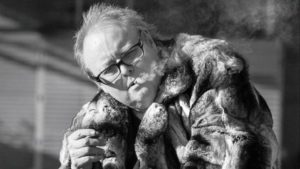 In the wake of a torrential downpour in early January, a sizeable and slightly random group of artists, collectors and art-curious celebrities descended upon the L.A. Convention Center for an “opening night premiere party”—hosted by Mad Men star Jon Hamm—celebrating the 23rd edition of the L.A. Art Show. Inside this somewhat inscrutable international sprawl, stateside dealers seemed split between kitschy street-art samplings and secondary-market standbys, while Asian and European powerhouses like Seoul’s SM Fine Art and Berlin’s König Galerie respectively showcased Korean Dansaekhwa masters and the in-demand minimalist sculptures of Mexican conceptual artist Jose Dávila. Elsewhere a silver-maned Matthew Modine entertained a gaggle of collectors admiring the actor’s photography from the set of Stanley Kubrick’s Full Metal Jacket, while another group of Hollywood heavies in one of the fair’s larger booths circled around a husky wheelchair-bound dealer. He was wearing snakeskin tennis shoes, black Adidas track pants, a billowy black T-shirt, black knit gloves, blue-lensed Persols, and a tiny black beanie with a sequined Chanel logo that belonged to his wife.

Though he’d shed his second skin of cashmere tracksuits, custom Alexander McQueen furs and blinged-out Chrome Hearts baubles; and his hair had mellowed from its trademark platinum shock to a buzzed pewter; and his once-intimidating bulldog posture had atrophied around the chrome frame of his Nova wheelchair; and he was sober, headed home early—not famously passed out inside his booth in the salad days of Art Basel—there was no mistaking the man in black tonight. This was Patrick Painter, perhaps the most complicated and controversial, iconic yet problematic, Angeleno art dealer to reach the high climes of the international art world…and then all but vanish.