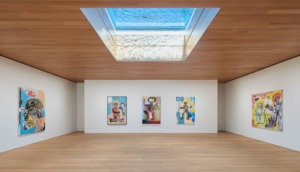 “[Jean-Michel] Basquiat did most of his painting in a ten-block radius of here,” says the founder of the Brant Foundation, Peter Brant, gesturing out the large plate glass windows of the foundation’s new East Village space. “We wanted to give the audience an opportunity to see the best of Basquiat’s work in the right setting. You can look at Untitled (Blue Airplane), and see the same buildings that Basquiat painted through the window behind it.”

The Foundation’s new building, a former power substation on East 6th Street that was once the studio of contemporary artist Walter De Maria and was recently renovated by architects Gluckman Tang, is, indeed, the proper setting. “A lot of research was done to create the moment you experience when you enter the show’s second floor,” Foundation director Allison Brant adds.

This research paid off handsomely—the show, and the space, offer a breathtaking view into the artist’s world, underscoring a resonance between the artworks and their location that brings a new layer of meaning to our understanding of Jean-Michel Basquiat.