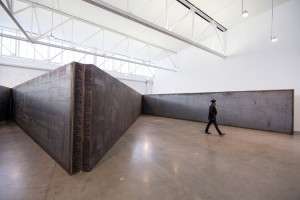 At the end of December, the PBS host Charlie Rose conducted a curious interview with Richard Serra about his new show in two locations of the Gagosian Gallery in New York, and it quickly became popular on the Internet. The conversation was notable mostly because it reached an uncomfortable deadlock over how to talk about Mr. Serra’s sculpture. (Mr. Rose thought one work in Mr. Serra’s new show looked like a cemetery; Mr. Serra disagreed. Repeat.)