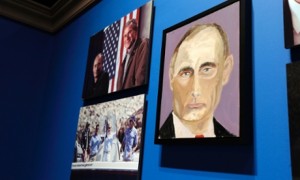 The comedy of a naive self-portrait apparently helped humanise the man most responsible for the 2003 invasion of Iraq.

His portrait of Putin actually looks like something you would find in one of America’s trash-rich Salvation Army stores and buy to laugh at. It’s got a classic amateur clumsiness and oddity to it. Bush has attempted to render shadow and shape in stylish blocks of fawn and woodchip and cookies ‘n cream, but they don’t sit right and the whole head looks mildly crazed. Perhaps this mad look is what is meant by revealing Putin’s “soul”, but it seems inept rather than insightful.

Idiocy in art has its charms. In the man who ran the free world into bloodstained buffers, those charms quickly sour. These empty headed daubs look the work of someone you wouldn’t trust to mow a lawn without cutting someone’s foot off.