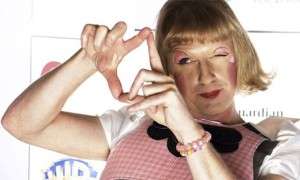 The critic of today’s art is ironically its biggest benefactor: Perry has taken a fifth-rate talent and made himself an old master.

In the great game of contemporary art, Grayson Perry is a master. He has perfected the move that trumps all others: denouncing the art world from within. His Reith lectures, to be broadcast on Radio 4 later this month, reportedly lay bare the cynical workings of 21st-century art. He’s in the papers today mocking his bete noire, Damien Hirst, and claiming that the avant garde art is no longer subversive because the entire bourgeoisie love it.

The joke, of course, is obvious. The favourite contemporary artist of that same bourgeoisie is … Grayson Perry. He is loved by Today-listening folk for his wit and perceptive comments and has done more than anyone else to make art a mainstream part of issue-debating, educated, middle-class British culture, Guardian or Telegraph reading. He’s thetoast of book festivals, the darling of museums.