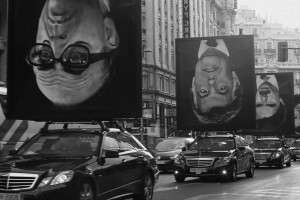 WASHINGTON, DC.- Santiago Sierra (Spanish, b. Madrid, 1966; lives and works in Madrid) and Jorge Galindo (Spanish, b. Madrid, 1965; lives and works in London) organized an unusual motorcade along one of the most prestigious thoroughfares in the Spanish capital in August 2012. Seven black Mercedes-Benz sedans made their way down the Gran Vía, each car incongruously topped with an upended monumental portrait of King Juan Carlos I or one of the six prime ministers of the Spanish democracy. Running Feb. 14 through May 18 at the Smithsonian’s Hirshhorn Museum and Sculpture Garden, “Black Box: Santiago Sierra and Jorge Galindo” presents “Los Encargados [Those in Charge]” (2012), the six-minute single-channel video the artists made of this event.