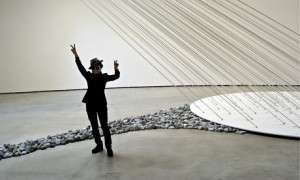 ‘The ladder John had to climb up was very high,” recalls Yoko Ono as we chat about one of her most famous works. It is called Ceiling Painting or Yes Painting, and it is one of the classics of conceptual art that fill her retrospective at the Guggenheim Museum in Bilbao. It consists of a stepladder leading up to a steel-framed panel and a dangling magnifying glass.  When John Lennon climbed up Ono’s ladder at the swinging London gallery Indica in 1966, there were more steps, but the word written above his head was the same as in this version: a “yes” so tiny you need the magnifying glass to read it.