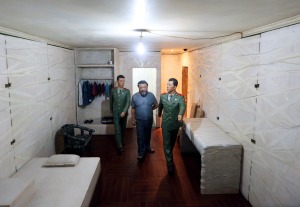 The 2012 survey of the courageous Chinese artist Ai Weiweiseen at the Hirshhorn Museum in Washington has finally arrived in New York, and is much improved. The show, “Ai Weiwei: According to What?,” which opens Friday at theBrooklyn Museum, has been beefed up throughout, but most notably by two installation pieces completed in 2013. One, “S.A.C.R.E.D.,” is perhaps the best work of art Mr. Ai has yet made.

As a result, this show is far clearer and more gripping than its original incarnation and something of a triumph. It brings many of Mr. Ai’s past efforts into focus as the juvenilia they often were, while making a persuasive case for his ability periodically to reconcile art and ideals and life — which in his case is usually, unavoidably, political — into a memorable balance.