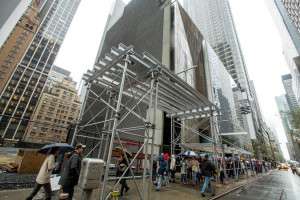 As scaffolding went up around the former Folk Art Museum building on Tuesday, one of its two architects broke his silence to say how devastated he and his partner are about the Museum of Modern Art’s decision to tear down “one of our most important buildings to date.”

“Yes, all buildings one day will turn to dust, but this building could have been reused,” Tod Williams said in his first interview since the Modern announced the demolition of this West 53rd Street building, completed in 2001. “Unfortunately, the imagination and the will were not there.”