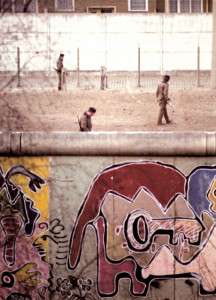 Monstrous as the Wall was, it offered artists like Noir – and musicians like Bowie – a dark subject matter that is lacking in safe consumerist societies.

Has culture ever recovered from the fall of the Berlin Wall? Seriously. The division of Berlin and state surveillance endured by people trapped in the eastern half of the city was the most visible and symbolic anguish of the cold war. The end of the Wall in 1989 was a sunny day for humanity. But in its monstrous strangeness, this scar running through a city had provided artists, novelists, musicians and film-makers with adark subject matter and surreal inspiration so often lacking in the safe, consumerist world of the postwar democracies.