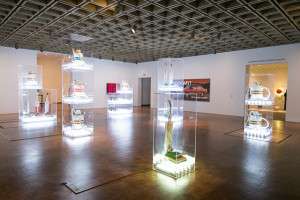 Given that he’s a goliath figure in the art world whose output spans three decades, it may come as a surprise that Jeff Koons’s Whitney retrospective is the artist’s first major solo show at a New York museum.

The exhibition offers 150 works dating back to 1978, giving visitors a comprehensive look at the former commodities trader’s ambitious and diverse artistic output. Everything about Koons and his oeuvre seems overwhelming, from the scale of the works to the (apparent) complexity of the execution: Koons famously consulted with Nobel Prize-winning physicist Richard Feynman to determine the proper saline mix to suspend basketballs in solution for his 1985 Equilibrium series. “Walrus (Blue Green)” (1999), a work that appears to be a simple colored mirror, lists six distinct materials including carbon fiber.