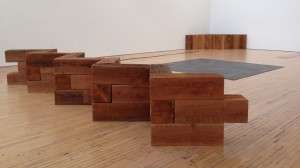 Carl Andre is credited with changing the history of sculpture.

Now nearly 80, Andre once scrounged industrial materials — timber, bricks, squares and ingots of metal — and arranged them on the floor. No pedestals, no joints and no altering of the surfaces.

In 1970, the Guggenheim Museum in Manhattan gave the young artist a retrospective. The minimalist sculptor’s career was going well.

It’s almost as if Carl Andre became a serious sculptor by accident. In the late 1950s, new to New York City, he was sharing a studio with the noted painter Frank Stella, who forbade Andre to paint.