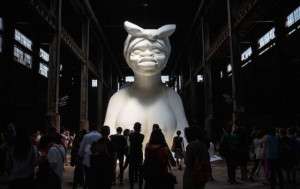 If you go to Kara Walker’s new exhibit, “A Subtlety,” at the Domino Sugar Factory in Brooklyn, a lot will overwhelm you. You’ll likely wait outside in a line that snakes down Kent Street, across from rowhouses that were once owned by Puerto Rican families and now fetch millions. You’ll sign a waiver absolving the show’s curators of legal responsibility for the asbestos and lead that you’ll inhale while you’re in the dilapidated 158-year old factory. And, once inside, you’ll see at least a dozen “sugar babies” made of molasses and resin—molds of black children literally melting before your eyes. You’ll smell the molasses as you walk through the exhibit anchored by a 35-foot tall sphinx made of what the artist has called “blood sugar” and sculpted into the shape of a naked mammy. You’ll also see white people. Lots of white people.

This is not a bad thing. In fact, it’s reassuring that so many white people have a vested — or at least passing — interest in consuming art that deals with race. At the same time I found it unsettling to view art by a black artist about racism in an audience that’s mostly white. It reinforced the idea that black people’s histories are best viewed but not physically experienced.