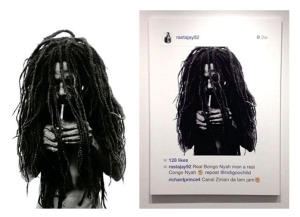 Yet another lawsuit has been filed by a photographer against a major artist, and the case could have a major impact on the interpretation of copyright and intellectual property law.

Photographer Donald Graham has brought suit against Richard Prince for using a photograph of a Rastafarian in his 2014 Gagosian Gallery exhibition “New Portraits,” which presented prints of other people’s Instagram posts, with comments by Prince. Prince obviously has a taste for this kind of image; the major lawsuit Cariou v. Prince (in which French photographer Patrick Cariou sued Prince and his dealer Larry Gagosian for copyright infringement) centered on Cariou’s pictures of Rastafarians.

The new case is distinct from distinct from Cariou v. Prince in some important ways. In phone conversations and e-mail exchanges with artnetnews, three attorneys who focus on intellectual property law outlined its significance.