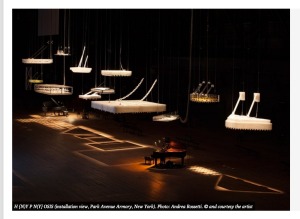 Working across a wide range of media, French artist Philippe Parreno came to prominence during the 1990s and is known both for his collaborative approach to artmaking (with artists such as Liam Gillick, Douglas Gordon and Tino Sehgal) and for treating exhibitions as objects or artworks in themselves, rather than as a collection of discrete works, most notably in his 2013 solo exhibition Anywhere, Anywhere Out of the World at the Palais de Tokyo in Paris, and as cocurator of Il Tempo del Postino (2007–9), a group exhibition in which the participating artists sought to occupy time rather than space. Following his recent exhibition H {N)Y P N(Y} OSIS at the Park Avenue Armory in New York and in advance of a new solo show at Hangar Bicocca in Milan, ArtReview asked him to explore that process of exhibition-making with one of the New York show’s curators, Tom Eccles.