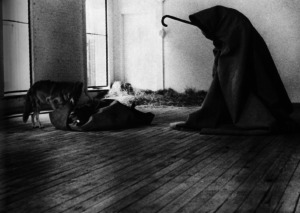 With a major retrospective opening in London this week, we focus on a crucial turning point in the career of the pioneering German post-war artist.

Joseph Beuys famously declared “every human being is an artist”.  The German artist believed creativity to be a universal principle that extends into all areas of human existence, and was thus preoccupied with what he saw as the revolutionary power of art to transform society; if each person is an artist, then society itself is one enormous artwork, continuously being made and remade.

An enigmatic, trailblazing and provocative artist, Beuys paved the way for many of his contemporaries in the field of post-war German art. Combining painting, sculpture and performance, Beuys was well known for working with unusual substances, such as fat, felt, copper, sausages, and everyday objects, incorporating the demotic into his exploration of the universal.