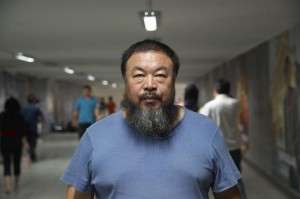 For a film that opened with Ai Weiwei’s statement, “Without freedom of speech, there is no modern world, just a barbaric one,” there was an irony in the fact that Andreas Johnsen’s Big Brother Watching Me… started practically without words. When the artist was freed in June 2011 following 80 days in prison, one of the conditions of his release was that he would not talk to journalists. For a while we wondered if this Storyville film might be purely observational, without an utterance from its central character.