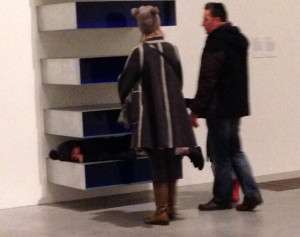 Bushwick gallerist Stephanie Theodore is at the Tate Modern today and spotted this hilarious/sad/incredible/unbelievable (so many mixed emotions) scene of parents allowing their child to use a Donald Judd sculpture as a … er … a bunk bed.  In response to my question of whether she actually took this almost-hard-to-believe scene she responded: yes.  I told the woman the the kids were using a $10mm art work as a toy, she told me I knew nothing about kids. Obviously, she doesn’t either.