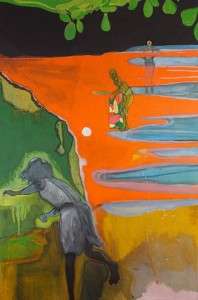 At 54, Doig is one of the most talked-about and praised artists in the world, his work housed in many prestigious public and private collections. Last year two Doigs, both painted in the 1990s, sold at auction in London for, respectively, $10.5-million and $12-million. Montreal currently has bragging rights as the sole North American venue for No Foreign Lands, which recently ended a three-month berth at the Scottish National Gallery in Edinburgh, Doig’s birthplace. Indeed, the last significant Canadian Doig show, a tour of public galleries in Ottawa, Toronto and Vancouver, was in 2001 while his penultimate retrospective, in 2008, lapped just European institutions.