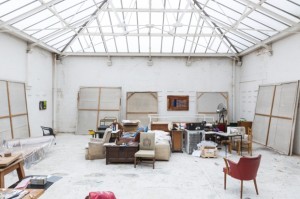 He may be in his 80s and in need of a wheelchair to get about, but Howard Hodgkin still paints with staggering power. Jonathan Jones meets a ‘living master’.

Howard Hodgkin sits in a wheelchair in his studio. Light falls through the glass roof on to big boards propped against white-washed brick walls. One by one, his studio assistant starts moving them to reveal a glistening array of new paintings. It seems banal to call them beautiful – but that’s what they are.

“When I was young,” says Hodgkin reassuringly, “I used to mind people describing my pictures as beautiful. I don’t any more.” Why did he mind? “I used to think that it meant the subject was neither here nor there.”

Hodgkin paints what most people would call abstract art. Yet he insists that every slither of luscious colour refers to a particular place and time. His serpentine brushwork is not decorative. Each painting has a “subject”, as he puts it.