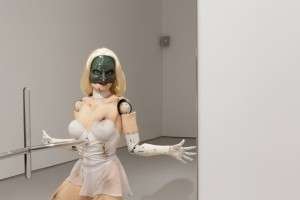 “I don’t want to tell you this work is about women,” said artist Jordan Wolfson over the phone, “because I don’t think that’s true.” Wolfson, a 33-year-old artist who works in video, performance, and sculpture, was on a lunch break at a special effects studio in Los Angeles where he was developing his latest work, an animatronic sculptural woman that will be on display at David Zwirner gallery, engaging with visitors one-on-one beginning March 6. Despite his statement, the doll is the result of an attempt, “in a way,” to explore the gaze, a concept with psychoanalytical roots that is most associated with the feminist notion of gender power imbalance that occurs in film, renaissance painting, and other media when viewers are asked to identify with the male perspective, and hence the objectification of women. What happens when the gaze is held by the sexual object?