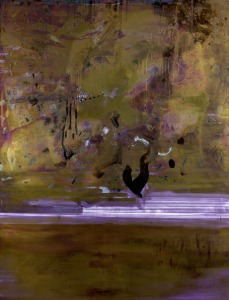 Get confused is the first and last message of “Alibis: Sigmar Polke 1963-2010” at the Museum of Modern Art. And if you think, as I do, that some degree of continuing bafflement is a healthy reaction to art, this disorienting contact high of a show is for you.

Polke, who died in 2010 at 69, is usually mentioned in the same breath with two German near-contemporaries, Anselm Kiefer and Gerhard Richter, as one of the great European male artists of the postwar years. Of the three, though, he was the most resistant to branding, and is still the hardest to get a handle on.

Museums want masterpieces, but Polke, though he produced some, was into process, not perfection. Art history wants wrap-ups, final accounts. The Polke retrospective is such an account, written with commas, colons, semicolons, dashes, ellipses, parentheses, but no periods, no full stops.