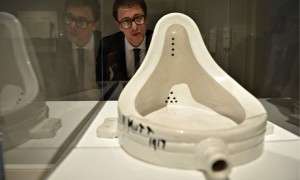 The original version of the 1917 urinal Fountain was lost without ever being publicly displayed.

He used the pseudonym R Mutt to conceal his authorship when he sent the work to an exhibition of the Society of Independent Artists in New York. The show’s organisers, among them Duchamp himself, rejected the entry, which led to the resignation of Duchamp and other committee members. His friend Beatrice Wood defended the choice of object, saying “the only works of art America has given are her plumbing and her bridges”.

Duchamp claimed the word “Mutt” was inspired by the cartoon Mutt and Jeff, and the company JL Mott Iron Works of Trenton, New Jersey, where he claimed to have bought the urinal.