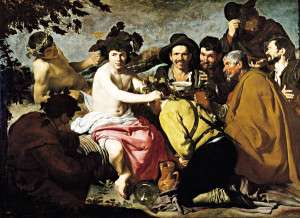 From Bacchus weaving his spell in a Spanish street to Gilbert and George getting gradually drunk on Gordon’s, here’s our pick of pieces in which booze plays a key part.

In this ironic masterpiece, the Spanish painter whose career took him from portraying the street life of 17th-century Seville to painting the king in Madrid and the pope in Rome edgily juxtaposes myth and reality, high art and low life. Like a modern conceptual photographic artwork (except done in magnificent oil paints), it imagines that the ancient god Bacchus has come to earth in early-modern Spain. Instead of the satyrs and maenads who follow him in the old stories, Bacchus is surrounded by scruffy boozers. The myth of wine as cultural aspiration meets the reality of drink as an escape from poverty.