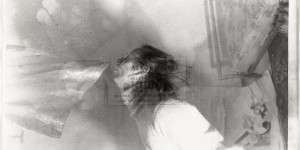 In 1976 I found myself in Düsseldorf, one stop on a mission to gather material for a special “European” issue of Art-Rite magazine (which we never managed to put out). One memorable highlight was a Sigmar Polke exhibition at the Frankfurt Kunsthalle. The entryway was blocked off by wood fencing, probably bought at a garden supply store, but visitors could view the gallery space by looking down from the mezzanine. Instead of hanging the pictures on the walls, Polke had scattered his paintings and photographs haphazardly around the space, many face down, in the shape of a giant swastika. Lettering across the fence read, “Art makes you free,” a bitter parody of the phrase “Arbeit Macht Frei,” which crowned the gate at Auschwitz.