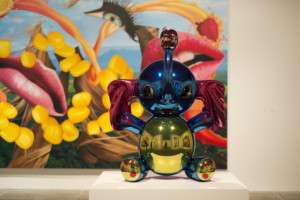 If I had to sum up American history in a word, I wouldn’t use racism,though obviously that’s a biggie. I’d pick hokum. I put it right up there withliberty, as in “life, liberty and the pursuit of happiness,” a passage which itself could be taken for hokum, written as it was by a man who owned slaves.

However, I don’t mean the term as it’s generally construed, i.e. bullshit. I refer to this definition: “A device used (as by showmen) to evoke a desired audience response.” As embodied by the oratorical sleight of hand that has sold Americans on everything from snake oil to unprovoked war in Iraq, hokum provides the filling for our proverbial apple pie, baked into such rhetoric as “manifest destiny,” “the lost cause” and “morning in America.” Hokum is also why I think Jeff Koons is the quintessential American artist: His work is a concrete expression of the idea.