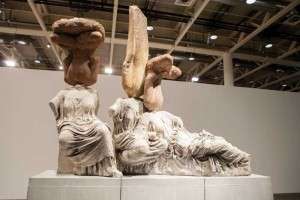 Why there are more and more works by Asian artists at the fair, many of them on Western galleries’ stands.

The VIPs who came to the opening of Art Basel yesterday found more works by Asian artists than ever before—and many have been strategically placed to capture the interest of collectors. Unlike previous editions of the fair, where works by artists from the Far East were limited to those on view with the emerging Asian galleries on the fair’s first floor and a few specialists on the ground floor, it now seems that nearly every gallery has an Asian work to show. This is despite the fact that there are ten fewer galleries from Asia at the fair (21 in total) compared with last year.

One reason for the increased number of Asian works is that international boundaries are less relevant in today’s expanded art world. “Collectors no longer pigeonhole artists as Chinese or Japanese, Western or not-Western; they can see stylistic relationships,” says Lock Kresler of New York’s Dominique Lévy (2.0/F4).