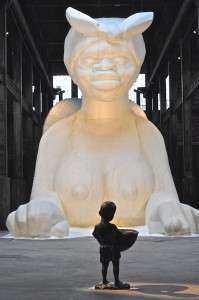 As if his museum-filling Whitney retrospective weren’t enough, Jeff Koons currently has a massive sculpture on view at Rockefeller Center. “Split-Rocker,” presented by Gagosian Gallery and organized by the Public Art Fund and real estate developer Tishman Speyer, is comprised of two halves, one the recreated head of a toy pony rocker that belonged to his son, the other the head of a toy dinosaur rocker. Each side is made out of steel and covered in flowering plants. They are brought together imperfectly, and where the edges of one don’t quite align with the edges of the other, you can peek inside to see the tubes of a sprinkler system.

Gazing up at “Split-Rocker” on the day of its opening last week, I found myself thinking about Kara Walker. In the dark, dank space of the old Domino Sugar Factory on the Williamsburg waterfront — quite far, although not too far from the touristy crowds of Rockefeller Center — she has also installed a work of public art: “A Subtlety,” a gigantic sculpture of a mammy-as-sphinx made out of sugar, presented by Creative Time. And though Koons and Kara are about as far apart as two superstars of contemporary art can be, their current public installations have remarkable overlap.