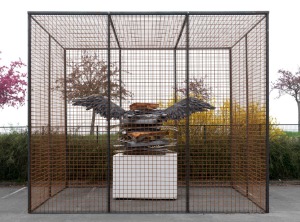 At 69 Kiefer is widely regarded as one of the most important artists alive, or, to put it another way, a master at the alchemy of metamorphosing all manner of items into something more interesting, and sometimes much more valuable than gold: contemporary art. He is one of a succession of notable artists who emerged from Germany in the 1950s and 1960s, beginning with Joseph Beuys, who was a mentor to the young Kiefer, and including Gerhard Richter and Georg Baselitz. Unlike Beuys, however, who was essentially a performance and installation artist, Kiefer’s work often takes more tangible and traditional forms: painting, sculpture, books, architecture — plus unclassifiable mixtures of one or more of the above.

He deals with epic subject matter. Often his paintings depict a landscape simultaneously ancient and modern, covered with ruins that might be the result of either war damage or the ravages of time: mighty ruined structures reminiscent of pyramids or ziggurats, halls like those of Wagnerian heroes and gloomy funereal vaults derived from the architecture of the Third Reich. From such pictures, lead model aircraft and warships may dangle, and metallic wheat or sunflowers sprout. The impression is of some lost civilisation.

He likes things that mutate, and that includes art. ‘Paintings change in two ways. They change naturally, with time, and they change intellectually, because the artist is only half of the process, the other half is the spectator and every spectator creates his own painting.’ So, I asked, will 50 per cent of the exhibition at the Royal Academy really be the creation of the visitors? ‘Absolutely!’