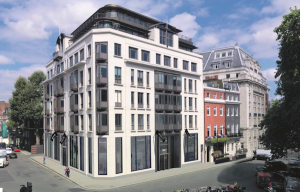 Phillips announced the opening of a new auction house and exhibition space in the exclusive address of Berkeley Square, London, on Monday. The official opening will take place during October’s buzzing Frieze Art Fair week. The relocation is part of an ambitious plan to propel Phillip beyond its long-standing third-place position in the auctioneering game (“Ostrowski Triumphs at Phillips’ Otherwise Tepid Contemporary Sale”.)

Phillips’ new London’s flagship will mirror its New York premises in 450 Park Avenue. The relocation, from the quieter area of Victoria to the sought-after Mayfair postcode, puts Phillips in good company. The building’s main entry will be accessed from Davies Street, where Gagosian has one of its two London showrooms. Both Sotheby’s and Christie’s have their sales rooms on nearby New Bond Street. The auctioneer Bonhams and a growing number of blue-chip galleries, including David Zwirner, Hauser and Wirth, Sadie Coles, and Pace, are also neighbors.