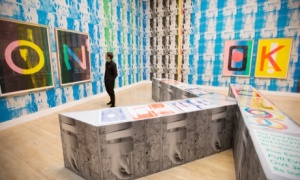 Has the Turner prize lost its power to shock? No – thanks to James Richards’s sphincter shots. But it’s Tris Vonna-Michell’s spellbinding spoken-word travelogues that deserve to win.

What a heartening way to celebrate 30 years of the Turner prize. People are always saying the Turner, which shocked the nation with Tracey Emin’s unmade bed and Damien Hirst’s bisected cow, has become tame and middle-aged. It no longer creates the kinds of visceral arguments about the nature of art that it did back in the 20th century, when Rachel Whiteread won both the Turner in 1993 and the K Foundation award for “worst artist of the year”. Nowadays, conceptual art is so widely accepted as part of every aspiring person’s cultural makeup that the Turner causes less controversy than The Great British Bakeoff.

It is Vonna-Michell who deserves the Turner when the winner is announced in December. For him, video is just a way of getting at something more elusive and magical: the mystery of live performance. Of the four, he’s the only one whose artistic personality shines through. He seems to have found a highly imaginative way of being in the world. You feel he is an artist when he’s on the loo, as much as he is when he gets up to perform. At the end of his film, he even thanks the audience for listening – what a charmer. The winner of the Turner prize, at least as far as I’m concerned, is the human voice. – says Jonathan Jones of The Guardian.