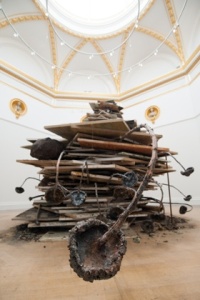 Only with the help of a blindfold would you be able to wander theRoyal Academy’s stupendous retrospective of his work and leave feeling anything less than drunk with amazement. However much you know about Kiefer, it’s impossible to be prepared for this show: for its scale, its pleasures, its provocations and – this must be said – its bafflements. This is a total experience. The work first speaks to the eyes, which instinctively scour every last corner of every painting, every sculpture. Then it calls to the heart, pulling from you all sorts of things Kiefer certainly didn’t intend (in my case: modern-day Syria; the 80s nuclear TV drama Threads; John Wyndham’s novel The Day of the Triffids). Last of all, it engages the head, as you attempt to unravel his complex, multilayered narratives. It’s certainly useful to know your history before you enter these spaces – and if you’re fluent in the language of Richard Wagner and Caspar David Friedrich, so much the better. But it isn’t necessary. In any case, mystification is half the point. No artist puts this much effort into the construction of their work without wanting their audience to linger over it, to try and fathom it out.