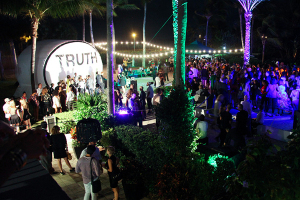 ON WEDNESDAY, a man with a plan was talking into a banana, walking down Lincoln Road. Two wives, fidgeting with rings and bracelets, prepared to step into a large inflatable concept—TRUTH—while the husbands stood a few paces back. At a bar made of sand, a woman wearing a pure white silicone alligator, clipped like a bib around her neck, told me I could buy one for $85, and I wondered if anyone had ever told her she had only to make it six times the size to sell it for two hundred times the price. Outside the Miami Beach convention center a man in a ten-dollar suit was handing out cards that promised INVITATIONS to ART SHOWS.

Jordan Wolfson, the cute young artist represented by David Zwirner, was occupying a pool chair, complaining about the “levels of exclusivity” in Miami. He was staying at the Edition, where lines for the basement sometimes snake up two flights of marble stairs and down the hall. I nodded, and said that if exclusivity is his bête noire, his artwork must be priced so reasonably.  – Sarah Nicole Prickett