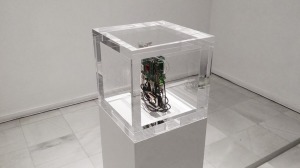 Trevor Paglen has tracked secret spy satellites, photographed so-called “black sites” like Area 51, cataloged hundreds of classified codes for military operations and their associated (and often bizarre) patches, and blasted images into space for the benefit of future civilizations or a visiting alien species. With a Ph.D. in experimental geography (it’s more than just maps) from the U.C. Berkeley and an M.F.A. from the School of the Art Institute of Chicago, Paglen approaches art with a steadfastly interdisciplinary and collaborative mindset, combining his academic training with an eye for aesthetics and a healthy dose of post-9/11 paranoia. His work has become increasingly relevant as questions about privacy and state power has moved from the fringes into mainstream political discourse, positioning Paglen as a central member of the artistic vanguard taking a hard look at the technological forces shaping the 21st century.