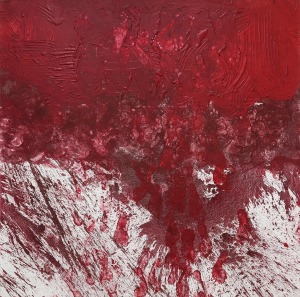 From his earliest performances and actions in the 1960s involving animal remains through his infamous multi-day, multimedia festivals staged at an Austrian castle, Hermann Nitsch has remained a figure of boldness and controversy. Earlier this year a major show at Museo Jumex in Mexico City wascancelled — but no such fate has befallen the artist’s solo at Marc Straus Gallery in New York, which opened Wednesday and features uncompromisingly confrontational paintings (made with acrylic pigments and, in a few cases, some actual blood). Scott Indrisek sat down with the 77-year-old artist to discuss religion, wine, crucifixions, and why Nitsch considers himself to be on the same side as the animal-rights activists.