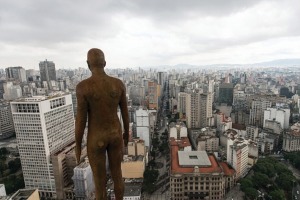 Just over a year ago, thousands of pro-democracy protesters took over Hong Kong’s busiest thoroughfares. This month, 31 life-sized naked bodies made by Antony Gormley fr om cast iron and fibreglass will infiltrate the skyline, overlooking some of the same streets. The arrival of the British artist’s Event Horizon, which is due to be unveiled on 19 November (until 18 May 2016), was delayed by more than a year after a banker jumped from a high-rise building owned by the project’s original sponsor, Hongkong Land.

In a city of auction houses, commercial galleries and art fairs, a project so accessible to the public takes on more significance. “To the degree that this is a very evident occupation of collective space, it’s a call for art to be allowed to be common again,” Gormley says.