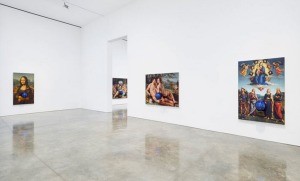 Although it may seem strange to devote a year-end roundup to the subject of atemporality, 2015 found the art world in a state of chronological confusion.

The year began, so to speak, in December of 2014 when the Museum of Modern Art opened “The Forever Now: Contemporary Painting in an Atemporal World,” which ran through April of this year and aroused skeptical responses from critics who found its purported “a-historical free-for-all” more of a collection of marketable paintings of the moment.

As 2015 progressed we saw the museification of Chelsea’s mega-galleries intensify, Morandi at David Zwirner being the latest example. Even the ephemeral art form of wall painting was ripe for restaging at Gagosian, where Roy Lichtenstein’s “Greene Street Mural” was paintstakingly re-created under the supervision of the artist’s former studio assistant.