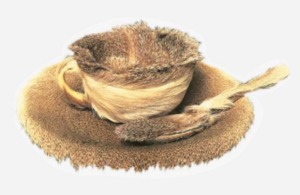 Despite its status as one of the most widely cited and recognizable art movements to come out of the early 20th century,Surrealism remains (perhaps appropriately) something of an enigma to contemporary art viewers. In some ways, it’s simply too strange—the paintings, sculptures, and writing that the loosely defined philosophy has produced appear to have little in common beyond an insistence on the part of their creators that they refer to the world of dreams and intuition. In this excerpt from Phaidon’s Art in Time, we look at some of the key works to emerge from this intense and variegated artistic ferment and how they relate to one another.

When poet André Breton defined Surreal­ism in the 1924 Manifesto of Surrealism, he described an attitude that scorned the logic of accepted hierarchies, conventions, and institutions—one that sought revolution beginning with the individual and extend­ing to the political. According to the Sur­realists, in focusing on the visible, tangible world, human civilization had ignored a world of other, superior (“sur”) realities that could be found through dreams and chance aspects of life, which they termed “the marvelous.”