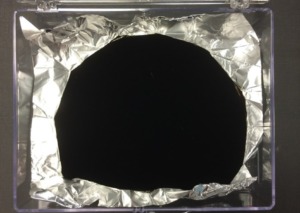 Since its invention back in 2014 Vantablack, the color dubbed the world’s blackest black captured the attention of the media and various artists around the world. The material described by Anish Kapoor as the color “blacker than anything you can imagine” or the color “so black that you almost can see it“1 aims to revolutionize the contemporary art as we know it. Or at least the art of Anish Kapoor who currently holds exclusive rights to the coating. The famous British sculptor is currently the only person that’s allowed to use the material in creative arts. The decision to sell the rights to one man only caused a stir in the art world and further increased the popularity of the material. But what exactly is Vantablack? And what is its purpose in the art world? The answers to these questions require going deep into the explanation of the scientific process of the creation of the world’s blackest black.