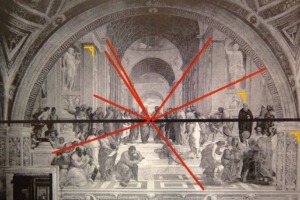 Since history can remember, artists have attempted to recreate the three-dimensionalities of the world. Aided by tools such as perspective in art, golden ratio, rhythm, variety, line, and the rest of the art’s elements, artists wrestled with Nature and its laws. The word perspective, when applied to art, signifies the accurate depiction of objects from a certain vanishing point on a two-dimensional surface, so that their relative height, width, and position to one another create depth.[1]

The obsession to be as accurate as possible in their representation of the world created the need for the perspective in the art which aided artists in the representation of both the world and its value systems. Recognizing that the world is not flat and that objects appear smaller or larger depending on the movement and placement, reflected the research in perspective which occurred in the early period of art history. Forming itself as one of the traditional rules of creativity, perspective in art was viciously attacked at the beginning of the 20th-century by the major avant-garde movements, such as Impressionism, Cubism, and Abstract art. Investigating for the new perspective in representing the world, authors rejected the rule of perspective in art and changed the face of creativity forever.