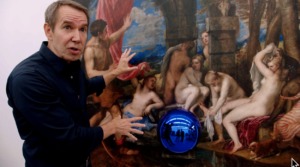 “There are a lot of people who know the price of everything and the value of nothing,” the art collector Stefan Edlis remarks in Nathaniel Kahn’s new documentary. The words, unattributed in the film and the source of its title, come from “Lady Windermere’s Fan” by Oscar Wilde, where they supply the definition of a cynic. But while this colorful and inquisitive cinematic essay on the state of the art world is occasionally skeptical and consistently thoughtful, cynicism isn’t really on its agenda.

Rather than lament the pervasive influence of money on contemporary art, “The Price of Everything” examines the relationship between commerce and aesthetics from different angles. “You can’t have a golden age without gold,” someone says, and by that standard we are currently in an epoch of platinum. The sale and resale of work by living and recently dead artists is a multibillion-dollar market, which bothers some people more than others.