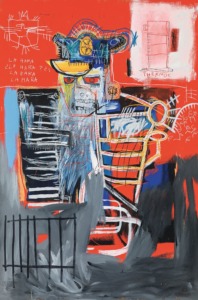 Distraught over the death of the graffiti artist Michael Stewart, he repeated, “It could have been me.”

“Basquiat’s ‘Defacement’: The Untold Story,” at the Guggenheim, is a small but timely and often surprising powerhouse of a historical show pegged to a not very good scrap of painting by a star-dusted name. The exhibition includes photographs, documents, and art works relating to the death, on September 28, 1983, of Michael Stewart, a twenty-five-year-old art student at Pratt and a frequenter of the time’s impoverished but raucous, creatively booming East Village and Lower East Side bohemia, from injuries incurred while in police custody. At some point later that year, Jean-Michel Basquiat used marker and acrylics to dash off a sketch of two fiendish cops beating an armless, legless figure, rendered in black silhouette. Lettered above the image is the legend “¿defacement©?,” with the second “e” crossed out. (The inverted Spanish question mark reflects the language of his mother’s Puerto Rican parents; his father was Haitian-born.) It was done on a graffiti-crowded plasterboard wall of the artist Keith Haring’s NoHo studio; unrelated tags of graffitists (Daze and Zephyr are legible) and random froths of spray paint share the surface. The police poses appear to have been loosely copied from a poster designed by the multitalented David Wojnarowicz, a then recent and increasingly forceful arrival on the downtown art scene, announcing a protest rally in Union Square that took place two days before the end of Stewart’s protracted death throes—he had been diagnosed as brain-dead—in Bellevue Hospital.

But Basquiat absolutely belongs in the Stewart story, as it’s told today. We are in an epoch both of grinding racial tensions, nationally, and of increasing numbers of African-American artists, in all creative fields, achieving success or being justly honored in retrospect. Basquiat can readily be deemed heroic from either angle, but he presents no convenient opportunity for tendentious interpretation. His message wasn’t a fight for freedom. It was that he was free.