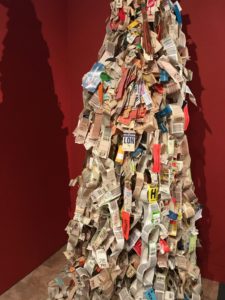 A re-creation of the auteur’s most personal show, madly grand and deadpan daft, essentializes a strange glamour that has leaked from the art world into culture at large.

The most bizarre exhibition in town this summer bears on the prevalence, lately, of “curating” as an honorific for the organizing of practically anything by just about anyone. “Grandfather: A Pioneer Like Us,” at the Swiss Institute, re-creates a show that the revolutionary, for good and ill, Swiss curator-as-auteur Harald Szeemann (1933-2005) mounted at his home, in Bern, in 1974. About twelve hundred objects, cunningly arrayed, document the life and work of Szeemann’s paternal grandfather, Étienne, who was a hairdresser with a peripatetic career in Europe. Most of the items—furniture, family photographs, a lethal-looking early permanent-wave apparatus, advertisements, religious kitsch, wigs, tools, mannequin heads, letters, no end of tchotchkes—belong to the Getty Research Institute, in Los Angeles, where a Szeemann archive and his personal library occupy more than half a mile of shelf space. Glenn Phillips, the head of the Institute’s modern and contemporary collections, describes “Grandfather” as “a project that for many curators has served as both a fantasy and a symbol of curating in its purest form—exhibition making as a creative act.” Madly grand and deadpan daft, the show essentializes a strange glamour that seems to have leaked from the art world into the culture at large.