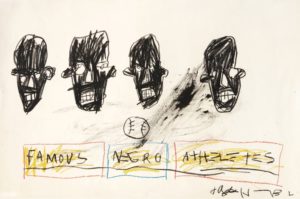 Glenn O’Brien was among Jean-Michel Basquiat’s earliest advocates, recognizing the young artist’s immense talent before his work made the leap from grafitti to the walls of New York galleries. Basquiat executed Famous Negro Athletes on paper as a gift for O’Brien who would go on to become a close friend of the artist over the course of the 1980s.

Imet Jean-Michel Basquiat in 1979 when he was 19 years old. I had been curious about SAMO©, whose rude and amusing graffiti had recently popped up around downtown Manhattan. People who made graffiti were then referred to as writers, but SAMO© was the first one who actually wrote more than a name. He was a poet and a provocateur, writing cryptic messages marking himself as a sort of a metacritical institution. Kilroy was here . . . and then there was Samo. If this was graffiti at all, it was something quite different. Graffiti had been almost a sport, a way for young urbanites to publicize their existence in a world of corporate logos by marking out territory, a practice so primal that a dog would understand.