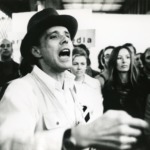 For the first documentary ever made about Beuys, director Andres Veiel dug into the archives, creating a film that is 95% footage of the artist. The first major documentary on Joseph Beuys, simply titled Beuys, is finally screening in New York for a short run at Film Forum. The artist is often referred to as Germany’s most important artist since World War […]