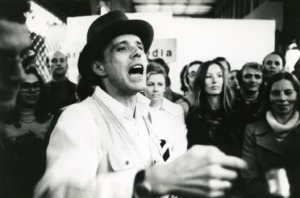 For the first documentary ever made about Beuys, director Andres Veiel dug into the archives, creating a film that is 95% footage of the artist.

The first major documentary on Joseph Beuys, simply titled Beuys, is finally screening in New York for a short run at Film Forum. The artist is often referred to as Germany’s most important artist since World War II, and with good reason — he pioneered new definitions of performance art, political activism, sculpture, installation, and art pedagogy in the war’s wake, and they are still widely circulated today.

Shockingly, despite this stature, there has not been a major Beuys retrospective in the US since 1979, when the Guggenheim in New York let him take over its building and left some critics and the less adventurous members of the public scratching their heads. No one knew then that he would die just seven years later, at the age of 64, or that his enigmatic approaches would come to be so widely imitated.