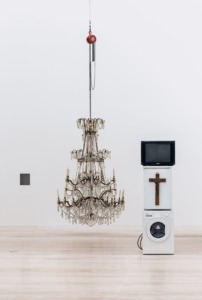 With ready-made materials and artifacts, Danh Vo’s art recasts the historical events and political ideas that have shaped his world.

Danh Vo had just started to gain recognition as a rising young artist when he decided, in 2010, to make a full-scale replica of the Statue of Liberty. He had been offered a one-man show at the Fridericianum, a huge exhibition space in Kassel, Germany. “The curator said he had seen shows of mine, and that I could deal with big spaces without putting too much into them,” Vo told me. “I’m very childish. When people want to put me in boxes, I go the other way, so I was thinking, How can I stuff that space? And my simple mind came up with the Statue of Liberty.” The whole hundred-and-fifty-foot monolith, he meant, cast in many separate elements, which would remain separate and unassembled.