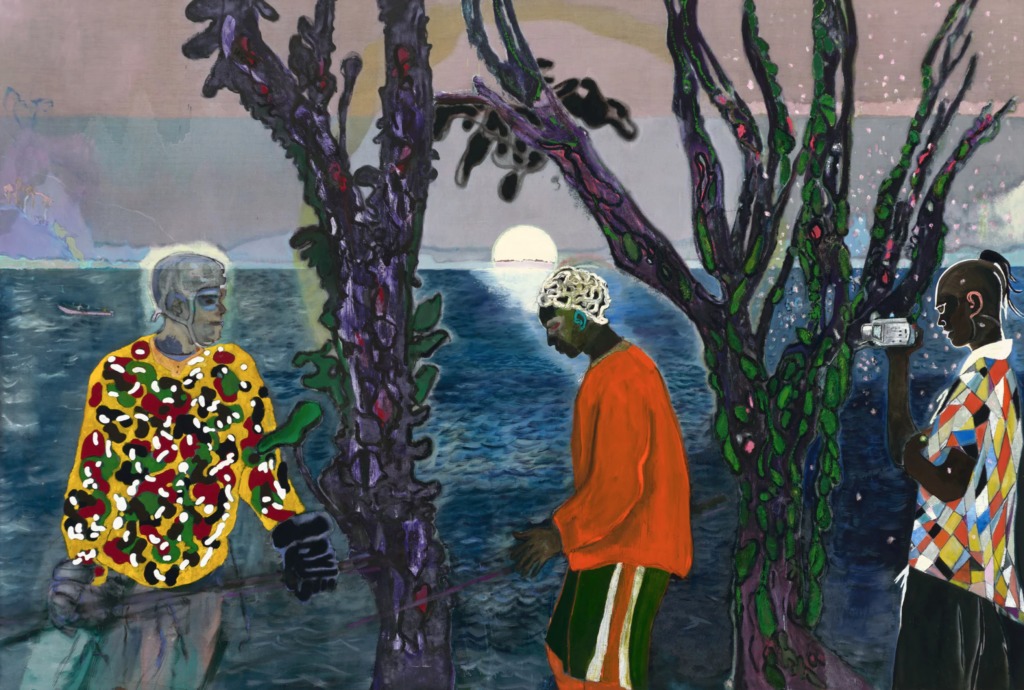 In these grave and noble paintings of our catastrophic age, the Scottish artist uses lurid colours to create bold beach scenes haunted by murders and mangy lions.

The art of Peter Doig takes place in a troubled Arcadia, a place of sunshine, sea and deadly snakes. In his new painting Red Man (Sings Calypso) (2017) a colossal figure stands on a golden beach, his bare – reddish – torso framed by the black iron structure of a coastguard’s platform. The sea is a green band flecked with daubs of white. The pale blue sky is hollowed out by puffy cloud shapes. On the ground, a man lounges in shades with a boa constrictor wrapped around him. Is it a pet or is it strangling him?

Two Trees is not about trees. It is about violence, and the ease with which it can become normal. He says he got the image of the hockey player from a hockey team he saw in New York who were all wearing desert camouflage. Meanwhile at the centre of the scene, a young man’s downward gaze refers to a killing that took place in his own neighbourhood. A third character, toting a video camera, alludes to the chilling phenomenon of people filming death and disaster instead of trying to help.

So Doig explains, but even without knowing any of that you feel the bejewelled tragic irony of this modern masterpiece. In its majestic, spooky gorgeousness this is a noble and grave picture of our catastrophic age. How magical, to see art that is so obviously destined to endure, when the paint is still practically wet. Peter Doigis a great artist and getting better.